Starting solid foods—when, what, how?

POSTED ON: February 17, 2014 | POSTED IN: Healthy Every Day - Articles from Our Doctors, Pediatrics 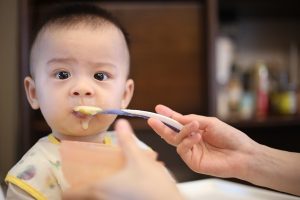 I remember having a conversation with my new-mom’s group as our babies were approaching the age of starting solid foods. The popular question was, “What food are you going to give first?” Answers ranged from the more traditional rice cereal to avocados or peas. One mother said she read that meats are a great first food. Another mother, whose husband is a nutritionist, stated she was going to give her baby fennel (the vegetable not the seed). Is there a right answer? Probably not, as recommendations have been changing over the last few years. However, here are some general guidelines.

Previously, experts thought that delaying introduction of food would minimize food allergies, but several studies have shown this is not true. In fact, the opposite may be true; introduction of solid foods a bit earlier (but not earlier than 4 months) may sensitize the body and decrease the likelihood of allergies. We do not know for sure. The American Academy of Pediatrics does recommend exclusive breastfeeding without solids for the first six months of life. When parents ask me when I recommend starting solid foods, I usually recommend their introduction closer to five and one-half months to six months.

What food should I start with?
Rice cereal is fortified with iron so it has traditionally been recommended as a first food. However, rice cereal does not have many other nutrients, and professionals today suggest introducing nutrient-rich pureed vegetables, fruits and meats instead of rice cereal. I do not recommend rice cereal as a first food. Avocados are an easy first food to prepare and provide healthy fats, which are important for a baby’s brain development. Other good first foods include yams, squash, beans/lentils, pears and bananas. Ground meats and dark leafy greens are good foods to introduce early to provide a good source of iron.

As a side note, it also was traditionally recommended to avoid highly allergenic foods such as nuts, fish, seafood and eggs in the first year of life. On the contrary, new evidence is supporting that delaying these foods actually may increase the likelihood of food allergy. Stay tuned for further recommendations, or make an appointment with your baby’s doctor to discuss these issues. The only food that should be absolutely avoided in the first year of life is honey.

How do I introduce foods?
Solid foods should be given with a small spoon rather than mixed in a bottle. The food should be pureed. If you make your own baby foods, adding breast milk or formula to the food can help make it easier to swallow. There is no need to add salt or seasoning to the food. At the beginning, start with a small amount of food (1 tablespoon or less). Your baby may not eat it all or may spit out most of it. If your baby seems to enjoy the food and is able to swallow it, increase the amount gradually. Stop feeding your baby when he or she seems no longer interested in eating.

Introduce one new food at a time and wait three days or so before starting another; if a food allergy appears, this process will make it easier to identify the cause. If you see any signs of allergic reactions such as rash, vomiting or diarrhea, discontinue the food and consult with your baby’s doctor.

Starting solids can be a fun time for both parent and baby, as parents start learning the food preferences of their child. Pick a variety of healthy foods to introduce to your baby and incorporate feedings into family meal time. This will help establish healthy eating habits from an early age that will have a lasting effect throughout your child’s life.