When cervical cancer is detected at an early stage, the five-year survival rate jumps to approximately 91 percent. This underscores the importance of regular Pap smears which can detect cervical cancer in its earliest stages. 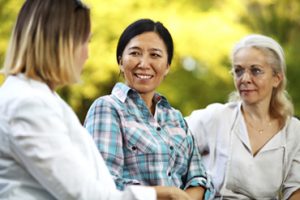 What Are The Warning Signs Of Cervical Cancer?
Early-stage cervical cancer does not have many warning signs. Even so, this type of cancer is becoming increasingly preventable due to the prevalence of routine Pap testing, which can detect precancerous and cancerous changes in the cervix before symptoms develop, and the human papillomavirus (HPV) vaccination, which protects against the HPV strains that are responsible for causing cervical cancer.

As with any type of cancer, early detection and treatment of cervical cancer is key to achieving the best possible outcome and quality of life. Therefore, in addition to taking preventive steps, it is important for every woman to know the warning signs and to see a physician promptly if she believes anything is amiss.

As cervical cancer advances, other warning signs may develop, such as:

Human papillomavirus, better known as HPV, is the main cause of cervical cancer. It is also the most common sexually transmitted virus in the United States. The HPV vaccine protects against the types of HPV that most often cause cervical cancer.

When detected early, cervical cancer is highly curable. But the cancer in its early stages may have no signs or symptoms. This is why regular screening is so important.